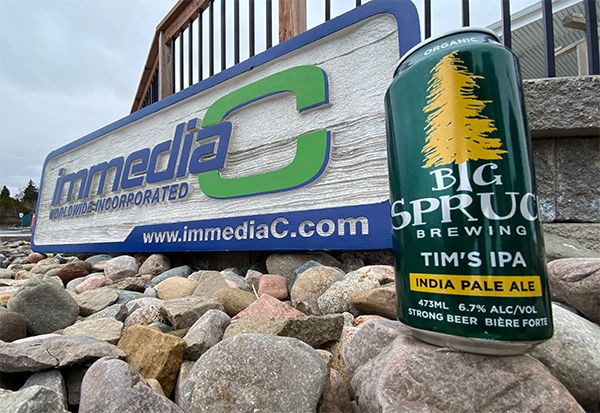 When the COVID-19 pandemic hit Nova Scotia last spring, many businesses felt an immediate impact. They found themselves navigating a brand-new set of roadblocks and obstacles that they’d never before encountered.

This was the case for Jeremy and Melanie White, founders of Big Spruce Brewing, an organic craft brewery based out of Nyanza, Cape Breton. As a destination brewery, Big Spruce’s pre-COVID business model relied heavily on visits to their scenic Cape Breton Island taproom. By mid March, this revenue stream was immediately and indefinitely shut off – leaving Big Spruce to question their strategy going forwards.

“We realized very early that the pandemic was going to threaten us, potentially more than other breweries... We rely so heavily on the tourist industry and visitation to our front door,” said White. “We wondered, ‘we’re going to lose this uniquely profitable component of our business. What are we going to do?’”

At a time where many companies tried to cut costs and spending, Big Spruce chose a different path – innovation.

With the help of John Leahy and the immediaC team, Big Spruce set out to create an online store which would collect orders to be distributed door-to-door across Nova Scotia. They knew their window of opportunity to stay competitive was short.

“We went crazy for four or five days and got everything finished, polished and launched. It was really quite staggering – we launched mid-week as one of the first breweries to get online ordering in Nova Scotia,” the Whites explained.

When the site went live, expectations were tempered. The White’s were pleased with the twelve orders they received on the first day. Though the result was equally encouraging the next day, the Whites and the Big Spruce team entered the weekend with moderate expectations for their new revenue stream.

Those expectations were shattered when they checked back late on the weekend, to find an explosion of orders. Hundreds of Nova Scotians had jumped on the chance to have their favorite organic brews delivered straight to their door. From that point, there was no looking back.

What began as an idea borne of necessity soon resulted in voyages throughout Nova Scotia - up to five times a week. They’d load their bright yellow, branded van, lovingly named the ‘Spruce Caboose’ to the brim with product and set off down the road. The Spruce Caboose made the rounds throughout Cape Breton Island, then down the Trans-Canada Highway towards Halifax, stopping in many communities along the way.

Big Spruce’s fears of decreased business seemed a distant memory for the now bustling brewery. “We found ourselves in this cycle for the next couple of months, where we were having trouble keeping up with the volume of online orders.”

The Whites feel that this process has gifted them a strong connection to the province and its people. More often than not, his early-pandemic package drop offs were accompanied by socially distanced conversations with his clients. Big Spruce staff got to be there for those who felt socially isolated, as they were there to support Big Spruce.

This feeling of partnership isn’t lost on Jeremy, who feels similarly about his experience with immediaC. “We had good beer and good clients who wanted it. They had a great system developed and it fell into the lap of our company that needed it. It was a win-win.”

Jeremy enters 2021 appreciative of Big Spruce’s past and confident in their future. “We feel glad to have been forced into this new revenue stream. Moving forward, regardless of the situation, we have another way to get beer into people's hands.”